A band I loved finally fell into everything they used to stand against. They are unrecognizable. Blame aging, having families, “growing up”, maturing as an artist—but something rubs me wrong. Maybe it shouldn’t because this band was at it for so long and deserve the recognition more than most, but they deserve the recognition for what they “did”, not what they “are” doing now. They made it for more years than most with my undying love, but alas, now my fondness is a memory for a trio of men at a certain time of their career, not the entire expanse of it.

When I say “Rock opera about How The World Is A Bit Messed Up And Stuff And How America Is, Like, Evil”, what band do you think of? Hint: It rhymes with Green Day. 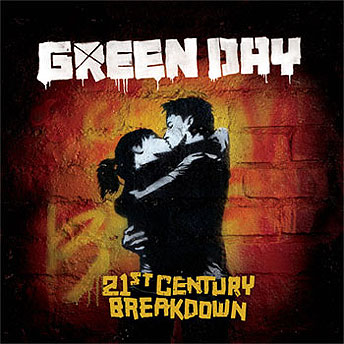 “21st Century Breakdown”, for me, was their big chance to show they didn’t need to ride the coat tails of “American Idiot” and write something radically different. I don’t know why they didn’t.

Like all albums put out by this important and well-known band, they were all different and pushed their sound in new directions. Even when they weren’t popular from 2000 until most of 2004 they always did exactly what they wanted (i.e. Warning and Shenanigans). I saw them perform in 2001 and I really believe that was the last time they were “them.” I am 26 now.

I own all the albums and can stand by the claim that they always tried new things… until “21st Century Breakdown”. To put it politely, some of it is salvageable, some of it is creative, but mostly, it’s the first album where they didn’t change anywhere near enough from the last album. Seriously, the majority of people I talk to find it exhausting to listen to this very long, droning, too-much-piano, songs-built-the-same, album. Individually tracks are great to put on a long-drive-mix-CD-for-your-car. But, who has an hour and ten minutes? It’s like they refused to trim it down and threw in all the B-sides when it could have been a tighter, shorter album. Seriously, take out five of these tracks.

I remind you, I built my life around this band for a decade, from the age of 11 until 21. I sung like Billie Joe for years, and I had a band “Flash Grenade” (one of the three albums now on iTunes) make thousands of dollars from 2004-2010 because of the inspiration I got from them. We played their covers. I respect these guys. But they’re wearing me thin.

I’m writing this because of two things. One: I read a blog by another guy about how they’re sellouts. Well, people have been saying that about a bunch of huge bands for years. That argument can’t be won no matter who you are talking about or to. It’s not worth having or listing reasons. The second reason I’m writing this is I’ve just gotten wind that they are writing a new album. No doubt it will come parading into all of our radios whether we like it or not, like “Boulevard of Broken
Dreams” which the replay frequency made me hate. My biggest issue is that, simply, there are other bands out there now and we should spread our attention around to them. The next album will be a big deal… well… just because we all expect it to be.

So first things first, here’s a few blurbs from the “haters” site I’m having a hard time disagreeing with:

“Then ‘American Idiot’ suddenly ate the world and within what felt like the space of a few months, Green Day had reinvented themselves. A whole new generation of kids – who went to their shows for ‘Holiday’ and ‘American Idiot’ and remained silent for ‘When I Come Around’ because they didn’t know it, which is pretty cool if you think about it – discovered them and the really, REALLY big leagues came calling.”

“It’s that the Green Day of 2009 are eminently hateable, three self-proclaimed spokespeople for a generation that didn’t ask to be spoken for who ramble in broad strokes and who’ve turned into as much of a commercialized product as everything they used to rail against. Hell, if The Killers acted in the way Billie Joe and co do, no one would bat an eyelid. And there’s no doubt that ‘American Idiot’ was, on the surface at least, a brave statement in a time when they didn’t have to make one.”

“America has changed, the world has changed. There’s nothing worse than a band who believes their own hype, and that’s exactly what Green Day appear to be doing. Like a reformed drug addict who can’t shut up about how much better life is now they’re clean, Billie Joe seems to think that after writing a couple of socio-political couplets he’s now qualified to pass judgment on an entire generation.”

For the whole article, which gives a fair assessment and opinion, click here: http://www.nme.com/blog/index.php?blog=134&title=green_day_are_back_yawn_yawn_yawn&more=1&c=1&tb=1&pb=1

So now let’s talk about this album they’re working on. I first heard about it on one of my favorite sites, www.punknews.org . Again, they are describing it in the vaguest of ways and I am terrified. Plus, who knows how many years this one will take. I was disappointed when I waited just over four years for “21st Century” and felt only “so-so” about it. Some good songs, some bad.

So the articles below show the broad, generalized way they’re talking about their new songs, much like a republican candidate describes how he is actually going to carry out specific ideas and make certain plans come to fruition. It’s so vague. Billie Joe says stuff like the following, actual quotes:

“we’re literally dealing with a new sound and it’s fucking with my head.”

Click here for that story and that video update: http://www.punknews.org/article/46668

“I think it’s so personal and so voyeuristic. I mean, this is the first time we’ve ever really sung about fucking.”

All I have to say is… what…? I’m sure you can find other places online where he poetically describes shadows and dust, power chords and poor people, bananas and the importance of voting.

“the songs are gonna blow their fucking minds”

That’s cocky. Straight up. I would never say that at any point in my music career, which I’m kind of glad is over/in hiatus for the moment if it could gradually turn into… Green Day circa 2009-2011 if given enough time. 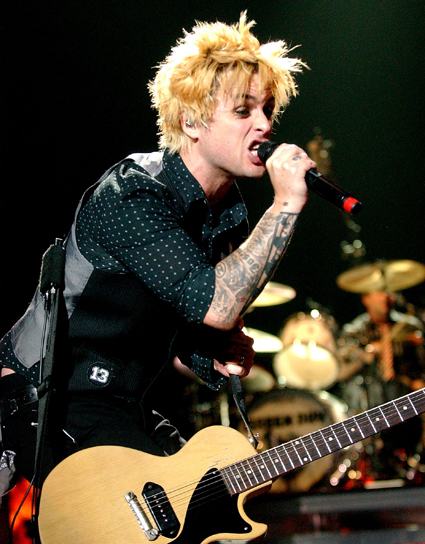 The unfortunate truth is, I feel like when I listen to them talk about politics and they make every fucking song a “message”, I just hear three kids who didn’t go to college, now 40 years old or whatever, talking about issues in unclear, indistinct, uninspired, fuzzy ways, like they get all of their information from the Daily Show on Comedy Central or what they saw in two-seconds on a subway poster. I guess that’s what I get since I went to college and their broad socio-political statements hit me in the face like a pair of balls. No one more than themselves (!) has bought into their rising-from-the-ashes-with-Pheonix-reborn-importance; especially Billie Joe. Maybe he feels like he owes to all of us to do something “important.” It’s like, gulp, Anti-Flag. I’d like a rock show, not a protest rally, unless you have really, really, really good shit to say and we’re actually going to take some fucking action after the show and not just buy 30 dollar tour shirts and go home filled with Redbull and have sex. There has to be more than that or else it’s masturbation for the soul, it is lip service for an idea that sounds nice with no follow through. And that makes me agitated.

I don’t think this band is consciously selling-out for any real purpose of increased cash flow. They just changed into something banal and benign and they seem to enjoy it. Hey, they love their job more than you or I and they seem to be having fun. God Bless them, but I’m not paying for their next $90 ticket price tour with U2 and the Black Eyed Peas. That’s just a guess.

No matter how much they change, the old albums stay the same, unless you’re George Lucas.